In 1493, an enterprising publisher in Nuremberg (Germany) commissioned a history of the world.  Recognising the power of the new technology of print,  Hans Schedel, approached local artists and writers to produce a richly illustrated – and very expensive – history of the world, which started with the story Adam and Eve and ended in a keenly anticipated imminent apocalypse.   The Liber Chronicarum (Book of Chronicles) was widely known as the Nuremberg Chronicle, and became an instant best seller.  The first coffee table book, the Chronicle included detailed pictures of Europe’s main cities (with a particular interest in German towns) and images of some of the most infamous popes and monarchs in European history.   Copies of the Nuremberg Chronicle sold rapidly.  Hans Schedel published an edition in German (the original was in Latin), and a knock-off was produced by an enterprising publisher who used inferior images to cut the cost of his Chronicle. 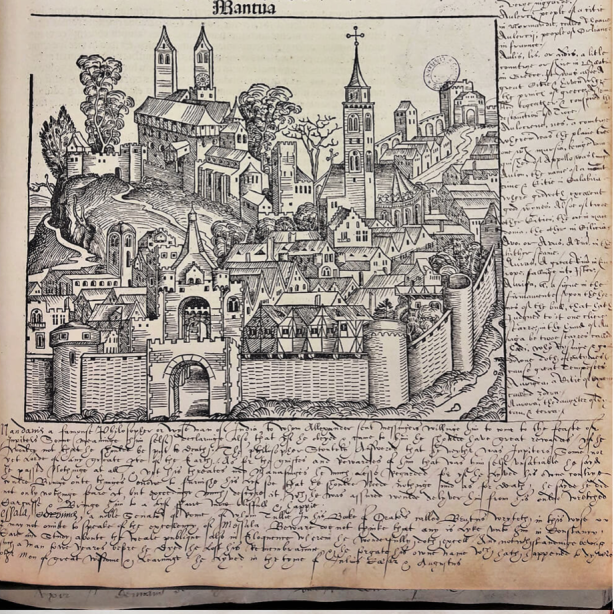 Because the Chronicle was so expensive, it has survived remarkably well, with copies preserved as a treasured relic of the first years of printing.    Dr Rosamund Oates (Manchester Met Uni) and Dr Nina Adamova (St Petersburg Uni) have been working on surviving copies of the Chronicle from around the world.   We have uncovered some fascinating examples of reading and censorship, for example a German Protestant who added a devil to the shoulder of a Catholic Pope.  Lots of readers were drawn to the story of Pope Joan. Joan was reported to be a female Pope in the medieval Church who was discovered after giving birth in a procession, one devoted Catholic reading her story in the Nurember Chronicle added a beard on her picture to turn her into a ‘male’ Pope.    With funding from the British Academy, Dr Adamova and Dr Oates set up an online exhibition showcasing some of the most fascinating examples of censorship and annotations.  The exhibition includes examples of annotations made by an Elizabethan gentleman, a Tudor historian, and even those of Henry VIII  (whose copy includes a note on bigamy.

The fascinating afterlives of the Nuremberg Chronicle continued into the modern period.  As rare and precious books, copies of the Chronicle, have travelled around the world.  Our research uncovered Chronicles which had travelled from England to New Zealand, and identified a number of copies owned by families in Lithuania and Poland later taken to Russia after wars in the 19th and 20th centuries.  Many of these are exhibited for the first time in our exhibition, ‘Reading the Nuremberg Chronicle’ at https://nurembergchronicle.co.uk.

The project was sparked by a copy of the Nuremberg Chronicle which is now in Chetham’s Library, Manchester and which used to be owned by two Lancashire gentleman (and one gentlewoman).  This copy of the Chronicle  provides an example of how a late 16th-century English reader supplemented the text of the Chronicle with extensive ‘coutacions and addicions’ borrowed from several printed Protestant histories.

As the page on display demonstrates, this book may be the most heavily annotated copy of the Nuremberg Chronicle we looked at.  One of the early modern owners, Thomas Gudlawe (d. 1606), covered the margins of this copy  with copious notes. Almost all of them are quotations or synopses of various history books, written or revised by English Protestant authors.

For example, Gudlawe used two books to annotate this page about the Emperor of the Holy Roman Empire, Sigismund.   In the upper margin he inserted a paragraph on Sigismund from Cooper’s Chronicle (1560) by Thomas Lanquet and Thomas Cooper,  a world history with a strong Protestant bias. In the right and the bottom margins, under the title ‘Residium historiae marterum etc. (‘the rest of the history of martyrs’), Gudlawe recounted the history of “that notable prophet & servaunt of god, Doctor Martin Luther”. For that he again used Cooper’s Chronicle as well as an even more famous Protestant ‘historia sacra’ – John Foxe’s Acts and Monuments (1st edition of 1563).

Thomas Gudlawe transformed his copy of the Nuremberg Chronicle into a large commonplace book, a good part of which dealt with a Protestant vision of sacred history. Gudlawe’s reading may seem even more meaningful if viewed in the context of the religious controversies of his neighbourhood.    Although Elizabethan England was officially a Protestant country, many of Gudlawe’s kinsmen and neighbours in Lancashire were Catholics and accused of recusancy.  In contrast,  Gudlawe’s choice of books was staunchly Protestant.  Gudlawe’s marginalia provide us with a glimpse into the reading practices and the private library of a country gentleman, showing how he used a variety of English books on sacred history.

On the trail of the Nuremberg Chronicle …. National Library of New Zealand

And the National Library of Russia

The exhibition can be seen at https://nurembergchronicle.co.uk

This work was part of a larger project:  Communities of Print https://communitiesofprint.wordpress.com  (edited volume forthcoming with Brill)