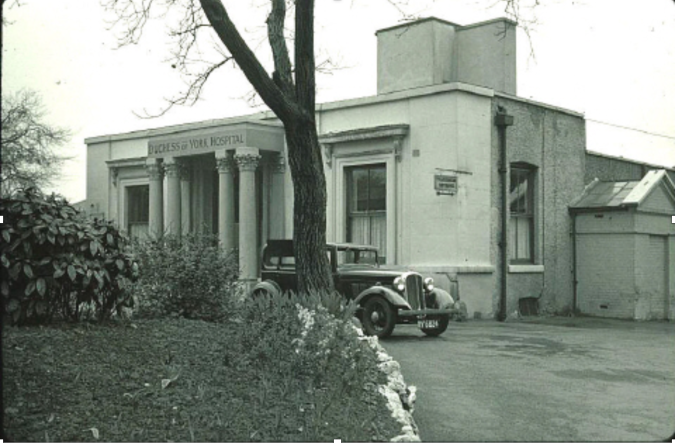 This has been an exciting search! A group of volunteers have been researching pioneering women doctors in Manchester and I have been looking at three forgotten women who all were involved in the Manchester Babies’ Hospital after 1914:  Dr. Elsie Brown Hey, Dr Sheila Ross and Dr Dora Bunting. I choose them, at random, from a list sent to the volunteers by Dr. Peter Mohr.

Today I am looking at what I have discovered about Sheila Ross and how I used the archives during the lockdown. When I first looked at the Annual Reports of the Manchester Babies’ Hospital in the Manchester University Archives, I had noted a Dr. Ross as one of the initial committee members: but just a surname was frustrating as I couldn’t find out who she was. But I was undeterred!

Peter Mohr had signposted us to the Medical Biographical Collection, so I looked up Ross and found that Dr. Sheila Margaret Ross (GB 133 MMC/2/Ross) had graduated from Edinburgh in 1904 and taken the Diploma in Public Health in Manchester in 1909.  So, I was already thinking about her age and how I might find her on the census. I looked up Sheila Margaret Ross on the FindmyPast census and saw that there was an entry for the 1939 register. There was Sheila, describing herself as a retired Doctor of Medicine, living with a housekeeper in Kent and her birth date of 1873.

From there I could narrow down the census requirements. As she took her medical degree in Edinburgh, I looked for census returns in Scotland. In 1881, I found Sheila aged seven, a scholar, living with her mother and three siblings, all scholars and two servants. 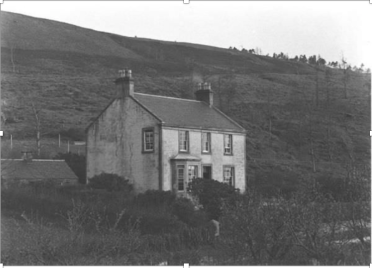 They were living in the Manse at Appin in Argyllshire where her father Duncan was the Free Church minister, although he was not home on census night in 1881. I could not find him anywhere on the 1881 census, but he was at home 10 years later – I hope he had not been away for ten years! Clearly not, as in the 1891 Census there were three more children at the Manse, Campbell born in 1882, Jeannie born in 1885 and Mary born in 1890. There was also a boarder Mary McLead and her brother Donald, an unemployed tea planter, both from North Uist in the Western Isles. Another intriguing story?

By 1891, Sheila, aged only 17, was also living as a boarder in Smith Street in Govan, Glasgow in a boarding house run by a Mary Edgar who was the secretary to a Church Mission and perhaps known to Sheila’s father. In 1891 Sheila declared on the Census form that she was attending classes at college or school called St George’s although the content of the classes is unknown. Interestingly, in the 1901 Census Sheila’s brother Campbell aged 19 was recorded as also staying in the boarding house, as another medical student.

However, it made me think Sheila was quite a bold and adventurous young woman, leaving home in the West of Scotland and moving to the city to study and indeed, some of the information I later discovered, confirmed this idea.  I could not find her at all in the 1901 census. I looked at the England and Scottish 1901 census but no luck at all. I wondered if she had travelled abroad but there was no trace of that either.

However, searching the 1913 Medical Register, which is also on FindmyPast, confirmed what the Biographical Collection had already told me: that by 1904 Sheila Ross had

graduated from Edinburgh University with a Bachelor of Medicine Degree and then in 1906 gained her MD – as a Doctor of Medicine. So, I imagine that in 1901 she was in Edinburgh but somehow not recorded on the Census. I had googled her to see if anything came up and discovered that a digitisation project at Edinburgh University (http://libraryblogs.is.ed.ac.uk/phddigitisation/author/aomcneice/) had found a medical thesis from 1906 written by Sheila M. Ross. It is entitled Acute hallucinatory insanity – a type of the confusional insanities, with clinical notes.  Sheila was awarded a medal from the School of Medicine in 1899 for Systemic Anatomy and the July 1904 edition of the British Medical Journal notes the graduation in 1904 where out of a class of 130, only seven were women including Sheila M. Ross.

An interest in Public Health meant that Sheila moved to Manchester to complete a Diploma in Public Health and in 1909 she graduated from the Victoria University in Manchester. Although at that time, she clearly maintained an interest in insanity, as she was recorded in the 1911 census as visiting the Holloway Sanatorium for the Insane (sic) in Surrey and staying with the superintendent W.D Moore, (1859-1926) and his family. They were a middle-class family with four servants and from the census return it seems likely that the Moores lived on the site. 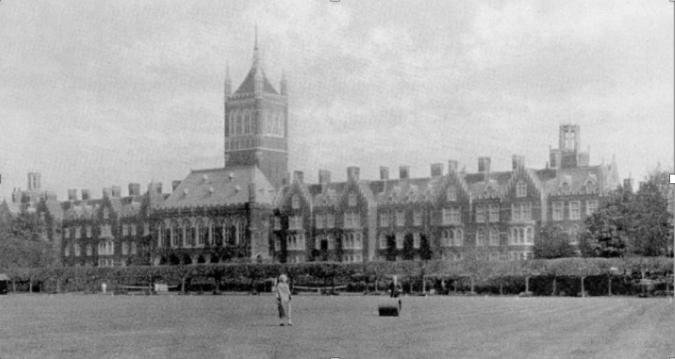 Holloway Sanatorium for the Insane in 1885 (Creative Commons, from Wellcome Collection)

Searching the 1911 Census for Sheila Ross taught me an important lesson: usually I look at the transcription of the census, in this case the transcription told me that Sheila Ross stayed with a W.D. Woore. I looked up this name to no avail and as it seemed such a strange name, I decided to look at the original image where it became clear that the enumerator had written the name Moore with a flourish, meaning that the transcription re-transcribed it as Woore. Once I realised that the name was Moore, many parts of this jigsaw felt into place. Sheila was at the Holloway Sanatorium as a visitor, citing her occupation as a Doctor of Medicine.A remarkable view into the lives of psychiatric patients at Holloway Sanatorium can be found in the recently digitised patient case books. Many of these case notes are recorded by W.D. Moore. Holloway Sanatorium was opened in 1885 as a hospital for the paying middle classes and W.D. Moore started work there in 1901. Set in 22 acres of lush parkland, the asylum was located to be visible from the nearby train station. The design of the sanatorium was based on the French idea that plain walls were obnoxious to the mad. Every inch of wall was “richly decorated including portrayals of small devils amidst the florid design”. (Wellcome Library Blog). I think Sheila must have still been interested in ‘lunacy’ at this stage and was perhaps building on ideas from her thesis written a few years before. The sanatorium was relatively new in 1911 and the place was one of the most extraordinary communities in England. The patients could wander freely down to the shops and back, mingling on equal terms with the locals.

By 1913 Sheila was working in the Public Health Laboratory in Manchester. Presumably, she needed a job. At that time the Public Health laboratory was under the auspices of a Swiss Doctor, Aguste Delefine (1855-1921), who was Professor of Bacteriology at the University and who developed a course for undergraduates in bacteriology and set up the bacteriological laboratories in the Medical school. This is interesting on several levels, firstly that Delefine was exploring ideas about public health and young children, particularly in relation to a diet of cow’s milk. Sheila Ross will have been aware of these findings, as the summer outbreak of infant gastro-enteritis had been one of the catalysts for the establishment of the Babies Hospital in 1914.  Secondly, Sheila Ross subsequently became a bacteriologist for the Public Health Department in Derbyshire in the 1930s, demonstrating the influence that working with Professor Delepine in the Public Health Laboratory had had on her.

By the early 1950s, Sheila Ross was working in some capacity, (possibly as a consultant as by the early 1950s she was in her late 70s) at the children’s hospital in Booth Hall, Manchester which had amalgamated with the Babies’ Hospital (now renamed the Duchess of York Hospital) when the NHS was established in 1948. Sheila Ross co-authored with paediatrician W.H. Patterson, an article in the British Medical Journal in February 1952, entitled: ‘GASTRO-ENTERITIS IN INFANCY’ AN ACCOUNT OF 286 CASES TREATED IN A GENERAL PAEDIATRIC HOSPITAL by N. M. MANN, SHEILA ROSS and W. H. PATTERSON. From Booth Hall Hospital, Manchester. Clearly the issue of childhood disease, in particular, sickness and gastro-enteritis, was a recurring preoccupation for Sheila.

I had suspected that Sheila Ross was adventurous, I discovered that during the 1920s, she travelled to Madeira at least twice and to Cape Town in 1923. In 1952 she travelled once again to Cape Town. I wondered if she visited the Manchester doctors Marguerite and William Douglas Drummond who had emigrated to Cape Town in 1926. Marguerite Douglas, born in Cape Town in 1881, was one of the doctors on the first committee at the Manchester Babies’ Hospital in 1914, she married Dr. Bill Drummond in 1915, and since 1912 she had been in charge of Maternity and Child Welfare as part of the Manchester Public Health department. Marguerite Douglas was also a signatory to the  Open Christmas Letter which was a public message for peace addressed “To the Women of Germany and Austria” signed by a group of 101 British suffragists at the end of 1914. This letter was also signed by Margaret Ashton who was the main benefactor and supporter of the Babies’ Hospital. Although Sheila Ross did not sign the letter, I am sure that these women will have been spoken of current events, and all will have been suffrage sympathisers and possibly critical of the war as well.