‘The sixtieth anniversary is when living memory passes into history,’ said Charlie Bell, a Manchester United fan and owner of the house in Firswood where Busby Babes’ physio Tom ‘Tosher’ Curry once lived. The Babes used to go round there for their tea after training. Charlie had arranged for Trafford Council to fit a blue plaque to the house, making this the third for the Busby Babes: Duncan Edwards and Tommy Taylor being the two players recognised so far.
My TV Journalism colleague Lawrence Brannon and I sat in the same room as the Babes did six decades before, filming interviews with Charlie and Tom’s granddaughter Jennie for our public event at MMU commemorating the 1958 Munich air crash which killed half of them, Tom, eight journalists and club staff. [‘How British Sport changed – how the air crash changed the city, English football and sports journalism’.] 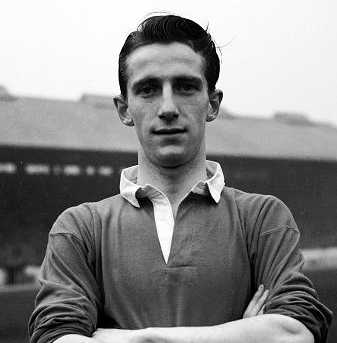 My next call was to see someone with a strikingly familiar family name: Debbie Viollet. Looking through the ticket requests for our evening, I thought this too much of a coincidence. Was she, I wondered, related to Dennis, the goal-scoring legend who survived the air crash, strapped in next to Bobby Charlton and pulled clear by hero goalkeeper Harry Gregg?

‘Yes. I’m his daughter,’ she replied.
Over a cup of tea, we discussed how Dennis’ achievements in a red shirt appear to have been forgotten. The Manchester-born inside left, a United player between 1949 and 1962, who won the League twice in ‘55-‘56 and ‘56-’57? Who then set a club record of 32 goals in 36 games in ’59-’60 – more than Law, Best or Cantona scored in a single season?
Sadly also overlooked by England – just the two caps – Dennis didn’t feature in Matt Busby’s long-term rebuild and was shipped out to Stoke in 1962 after 178 goals in 291 appearances for United, followed by a period training in the USA and his eventual death there aged 65 in 1999.
Debbie produced a box of family photos and sat alongside grandson Kaiden Dennis – named after .. who else?.. who used to call Old Trafford ‘Grandad’s house’ when they drove past. For a very personal illustrated tribute to a Busby Babe whose place in history should definitely be reclaimed, this was the stuff of dreams.
What a nice touch from the United fans who gave Debbie a round of applause as she took her seat for our tribute. Whatever you may think of football fans, they don’t forget.
There is no blue plaque at the former Viollet family home at 561 King’s Road, Stretford … yet.